Towards mutual benefits, the EU and China commit to work together to meet global climate change targets and to promote energy transitions

The EU-China Energy Cooperation Platform (ECECP) was officially launched in Beijing on 15 May 2019, under the witness of more than 200 representatives from a wide range of fields of both sides, including government officials, well-known researchers from NGOs and institutions, leading energy company executives , as well as scholars and the media.

The official launch of the ECECP was endorsed in the EU-China Leaders Summit Joint Communique, which was signed in April by China and the EU leaders. The ECECP project, funded by EU, will serve as the most significant platform to foster exchanges and cooperation between EU and China, and as a bridge to pass on experience in energy policy and market designing, while bringing close industry players from both sides. 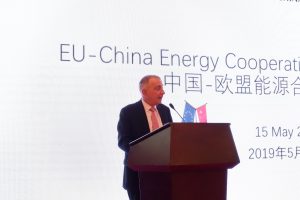 Energy is in fact of great importance in the EU-China bilateral relations. “As two of the world’s biggest economies, EU and China are both actively promoting the energy transition, and tackling climate change. We share the same vision and goals.” said Nicolas Chapuis, the Ambassador of the European Union to China, during the opening remarks,.

Megan Richards, director of Directorate-General for Energy of European Commission, said that “the launch of this platform is not just the first cooperative action that we have been taken in the energy sector, and we actually have been working with China for many years in clean energy transition……But we think that there is even more

progress that can be made.” “The platform is a unique tool to turn all of the political objectives into tangible results. We can show leadership to the rest of the world that with our practical development we can really move forward and can set up an example,” said Richards. 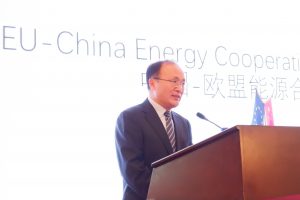 Her remarks was well agreed by the keynote speaker of the Chinese side, Mr. An Fengquan, the Deputy Director of Generation, International Cooperation Directorate of China National Energy Administration. According to Mr.An, China is currently speeding up the clean and digital energy transition, while building a more secure and efficient energy system. In this regard, the advanced technology, management mechanisms as well as the rich practical experience of the European counterparts is of great value for China to reference to, while China has the world’s biggest energy market. Therefore, the energy sector shares a strong complementarity between the two sides, highlighting the important role of ECECP platform in deepening the bilateral exchanges and cooperation of the energy sector for the future.

According to Dr. Flora Kan, team leader of ECECP, the main tasks of the platform is to help China to promote the energy transition towards a clean, sustainable, and more efficient energy system, through conducting joint researches, holding seminars and tour visiting, while concentrating efforts on several key areas such as electricity system, LNG and natural gas market, renewable energy, market mechanisms in financing energy efficiency, as well as fostering innovative entities and commercial activities. The whole project will be implemented by three stages, and hopefully be finalized by the year 2021 with nine important reports as research outcomes.

Four round-tables themed panel discussions were warmly held at the lunch event, where experts and scholars from both sides engaged in extensive and in-depth discussions on the topics of power market reform, natural gas market development, energy saving and energy efficiency, clean energy market financing and technology innovation. Experts from both sides all expressed their expectations and best wishes for more practical cooperation afterwards regarding the energy sector, in order to enhance mutual understanding and to safeguard leveling playing fields for the business. 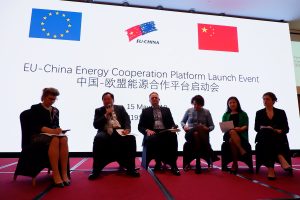 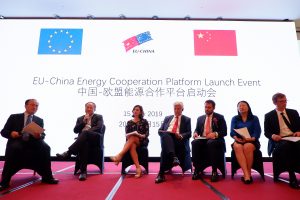 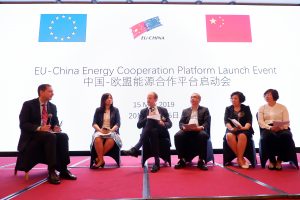 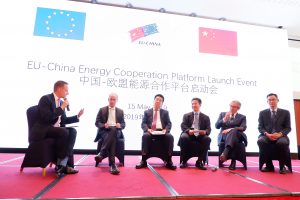 The successful launch event marks the formal kick-start of the implementation stage of ECECP project, which will contribute to the in-depth dialogue, exchanges and win-win cooperation between China and the EU in the energy field in the future.

Opening remarks - His Excellency Nicolas Chapuis, Ambassador of the European Union to China

Moderator – Octavian Stamate, Councillor for Energy, Climate and Environment, Delegation of the European Union in China