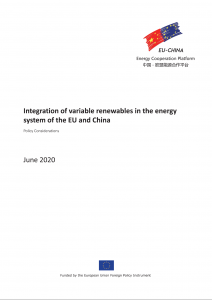 China and the European Union have many things in common, many challenges to discuss together, and many good practices to share. This is particularly the case in the power sector; China leads the world in its investments into renewables generation capacity, and as the leading manufacturer of PV panels. The EU has also made enormous strides in achieving a rapid growth in installed renewables capacity, and as the main producer of wind turbines, particularly offshore.

The two reports presented here look at the global picture from two angles: the use of markets to give new impetus to the power sector while guaranteeing security of supply; and the integration of an increasing amount of renewables into the power sector and the markets.

The formation and implementation of markets in the power sector is a challenge, and a complex task in giant territories like China, with about 30 different provinces, and the EU, with its 27 member states. Inevitably markets operate at different levels (nationally and locally).

The power sector, by its very nature, also requires a ‘sequence of successive markets’ (from months ahead, to day-ahead, intra-day and spot markets). Consequently, extensive territories end up with a sequence of successive markets that operates on two levels. Decisions at each level must, in one way or another, be linked with the physical management of power flows through the grids and the system.

The same questions arise when power systems and markets are required to absorb an increasing proportion of renewables. Solar and wind generation require very high fixed-cost investments upfront and their output fluctuates. How are the existing market sequences responding to renewables in China and the EU? How should market outcomes connect with the new needs of the power system in the face of intermittent output? Where should new practices be concentrated – nationally, or locally? And where in the market sequence should those new practices be introduced? How will they affect the day-to-day management of power flows?

These questions lead inexorably to a further question: are the challenges posed by renewables mainly operational (how to adapt within the existing power system), or mainly infrastructural (how to invest to redefine the structures of the existing sector)?

Read the reports, and you will know all. May friendly cooperation between China and the EU long continue!

Director of Florence School of Regulation

As the largest developing country in the world, with a population of nearly 1.4 billion, China consumes more energy than any other country. It is now determined to develop a green economy, pushing for sustainable economic growth within the red-line environmental limits.

Yet economic growth is not possible without a fundamental transformation of the energy sector. The “four revolutions and one cooperation” called for by President Xi Jinping aim to transform both energy consumption and energy supply, develop new clean technologies and strengthen close international cooperation on energy security.

The direction for the revolution is also clear. China will build a clean, low-carbon, safe and efficient energy system with a strong emphasis on energy security. President Xi Jinping stresses that “low-carbon energy system directs human future” and emission reductions are key to reach the global goals set by the Paris agreement.

Renewable energy is one of the key technologies in the energy system of the future. China introduced a Renewable Energy Law in 2005, and since then the promotion of wind and solar energy has been a cornerstone of China’s energy strategy. China and Europe have been front runners in the massive deployment of these technologies, and in the huge cost reductions the world has experienced in the past decade. Many wind and solar power projects are already competitive with fossil fuel projects; in the coming years renewable energy is set to be the cheapest global energy solution.

There remain, however, a number of challenges which could hamper the future deployment and integration of renewable energy. Two of the three reports from ECECP, “Supporting

the construction of renewable generation in the EU and China” and “Integration of variable renewables in the energy system of the EU and China”, highlight the challenges ahead and offer possible solutions as country leaders weigh up the next step forward in the transition to low-carbon energy systems. Many of the lessons already learnt are similar and relevant both to China and the EU, although future measures must be tailor made to the specific Chinese and

European contexts. Investors require a stable policy framework, clear and ambitious targets for deployment and risk-mitigation. At the same time, power system flexibility and efficient power market design, with a level playing field for all technologies, are important prerequisites for the integration of renewable energy into the power systems.

These reports are important milestones in EU-China energy cooperation. Policy decision makers should study and learn from the experiences from the two front runners. The lessons learnt may also inspire other countries and regions to accelerate the development and integration of renewable energy in the drive towards a global low-carbon economy.

This report was prepared by