Electricity Markets and Systems in EU and China: Towards Better Integration of Clean Energy Sources NEW 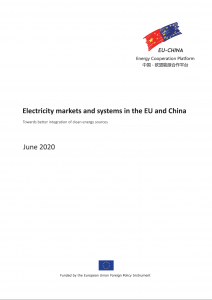 Electricity marketisation reform in the EU has been through a long process, starting with the first energy package in the 1990s, and followed by a second and third version. The fourth energy package issued in 2015 set targets for an energy transformation by 2030. These four energy packages are seen as milestones along the path towards EU power market reform.

They have ensured that the reforms were carried out in an orderly way, including: unbundling of monopoly and competitive businesses and the promotion of competition; establishment

of independent verification relating to transmission and distribution pricing; formation of independent regulatory agencies; opening up of the retail market; creation of a competitive electricity market; national and regional markets coupling; and the promotion of market mechanisms that favour renewable energy consumption.

China’s electricity marketisation reform has experienced a similar but lengthier process. A starting point came with the bid to create an attractive investment environment for the electricity sector. The government then moved to separate government and business

responsibilities, with the aim of tackling capital shortfalls and operational inefficiencies. The development of an electricity pricing system has been the natural next step. The twin track price scheme that used to be implemented under China’s planned economy has been replaced by a benchmark pricing policy at provincial level. Other major breakthroughs have been the separation of electricity generation from China’s vertically integrated systems, the launch of an independent regulatory agency and the completion of transmission and distribution price verification. China has now begun to establish a competitive electricity market and relatively independent power trading exchange centres. In 2019, market-based electricity trading accounted for 30% of the total generating capacity. At the same time, the electricity retail market has been gradually relaxed.

Nearly 30 years have passed since implementation of the EU’s first energy package. This paper aims to pass on the lessons learned in the EU over that period. It classifies and summarises the key stages, including the unbundling of monopoly entities and the promotion of competition, the development of a competitive power market and various trading products, regulation of transmission pricing and ancillary services, market coupling, cross border exchanges, market regulation and transmission pricing verification (which may also be applicable to China’s cross- regional electricity trading). China’s ongoing power marketisation reforms stand to benefit from the EU’s 30 years of experience.

Today, both China and the EU are facing challenges sparked by the rapid development of the renewable energy sector and the move away from fossil fuels towards renewables. By 2030, China and the EU aim for renewable energy to hold a share in the energy market of 20% and 30% respectively. In comparison with other industries, the power industry carries more social and economic obligations, and faces a correspondingly uphill struggle in creating an electricity market distinguished by fairness, order and full competition. We hope to continue working with the EU to deepen our exchange of knowledge, and so make strides towards to our ambitious 2030 energy transition targets.

China and the European Union have many things in common, many challenges to discuss together, and many good practices to share. This is particularly the case in the power sector; China leads the world in its investments into renewables generation capacity, and as the leading manufacturer of PV panels. The EU has also made enormous strides in achieving a rapid growth in installed renewables capacity, and as the main producer of wind turbines, particularly offshore.

The two reports presented here look at the global picture from two angles: the use of markets to give new impetus to the power sector while guaranteeing security of supply; and the integration of an increasing amount of renewables into the power sector and the markets.

The formation and implementation of markets in the power sector is a challenge, and a complex task in giant territories like China, with about 30 different provinces, and the EU, with its 27 member states. Inevitably markets operate at different levels (nationally and locally).

The power sector, by its very nature, also requires a ‘sequence of successive markets’ (from months ahead, to day-ahead, intra-day and spot markets). Consequently, extensive territories end up with a sequence of successive markets that operates on two levels. Decisions at each level must, in one way or another, be linked with the physical management of power flows through the grids and the system.

The same questions arise when power systems and markets are required to absorb an increasing proportion of renewables. Solar and wind generation require very high fixed-cost investments upfront and their output fluctuates. How are the existing market sequences responding to renewables in China and the EU? How should market outcomes connect with the new needs of the power system in the face of intermittent output? Where should new practices be concentrated – nationally, or locally? And where in the market sequence should those new practices be introduced? How will they affect the day-to-day management of power flows?

These questions lead inexorably to a further question: are the challenges posed by renewables mainly operational (how to adapt within the existing power system), or mainly infrastructural (how to invest to redefine the structures of the existing sector)?

Read the reports, and you will know all. May friendly cooperation between China and the EU long continue!

Director of Florence School of Regulation

This report was prepared by